So a lot of us talk about injuries that affect our running/training.  I’ve never been one to talk about my health other than that.  And if you don’t care to hear about it – feel free to stop reading here.  I felt like I wanted to share about this because a lot of things in my life are being affected by this diagnosis of (Polycystic Ovary Syndrome) PCOS.

I had decided to stop taking my birth control pill at the end of 2016.  I had been taking it for many years to control my painful cycles.  Michael and I want to start a family, and going off the pill was the first step.

At first, I felt great.  The mental/emotional clarity I felt was great.  And to my surprise, my cycles weren’t awful! But after awhile, I began to notice that my cycles weren’t consistent in length.  So when I went for my annual checkup in April 2017, I was told to come back if they didn’t normalize.

Fast forward to last week – they had normalized over the summer, but then went crazy in the fall.  So I went in to see my doctor since they were still abnormal and we had been trying to conceive for over a year.

He had me come back the next day for an ultrasound to confirm his suspicion.  They did confirm that I have PCOS.  This is mostly characterized by cysts on the ovaries, and it comes with litany of other symptoms and issues. The ones that I’ve been affected by is weight gain and issues conceiving.

Since PCOS is an endocrine disorder, it affects other aspects of hormone regulation.  Most people with PCOS are insulin resistant, hence the weight gain I’ve experienced.

So to combat this, I’ve been put on a drug called metformin (which is typically used for diabetes) to get my hormone levels corrected.  I will also have to pretty strictly follow a whole food diet (with a focus on low carb, high protein) to combat the insulin resistance.

The first few days have not been fun.  The side effects are mostly GI related, and I’ve had them! I’ve also noticed a decreased energy level.  I’m sure I’ll get used to it over time, but right now, it stinks!

I still have a lot of learning and research to do to find out how to change my lifestyle to accommodate for PCOS, but I know I want to find the most natural options for me to combat this.

If any of you have experience with this – follow any bloggers with PCOS – please share.  I have a lot of learning to do and it pretty overwhelming!

The week leading up to Christmas is always a little crazy.  Lots of activities and last minute prep work. This week was no exception. But before I jump into the craziness – I wanted to share a few pictures of Christmas in our new house!

Monday after work, my mom and I were going to go to my old high school’s choir concert.  I love their Christmas concert every year.  I had a pretty active day, so I didn’t grab a workout before the concert.

Tuesday night was a potluck dinner at work.  Since I got home early enough, I made sure to get in  2 miles on the treadmill.

I didn’t have a lot of time after work for a workout, AND I didn’t have time to shower. So I just walked 1.5 miles on the treadmill, washed up, and headed to my mom’s house for her annual Dirty Santa ornament exchange.  I ended up leaving with the same ornament I brought because I love it so much!

On Thursday, I took a half day off of work.  I had a lot of last minute errands to run before our Christmas celebrations.  We drove around to find some pretty lights and found this cool house nearby:

I got in 2.5 miles before all the chaos started on Friday.  I took the day off to prepare for our big family dinner (my stepdad’s family).  We had 21 people over our house for dinner.

Sorry about the sideways picture – I can’t get it to turn correctly! 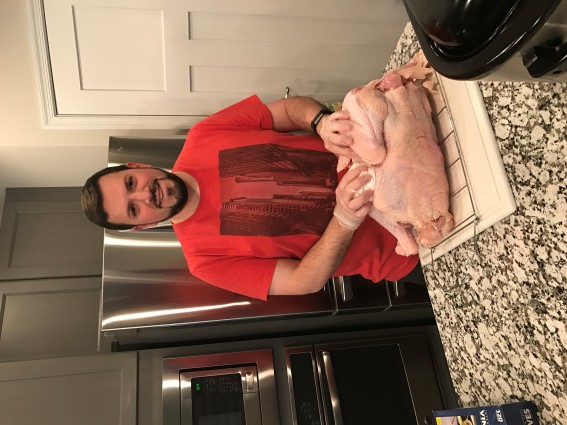 On Saturday, I convinced my husband to walk 2.5 miles with me around the neighborhood.  We had an otherwise relaxing day before dinner & Christmas celebration with my dad and stepmom. 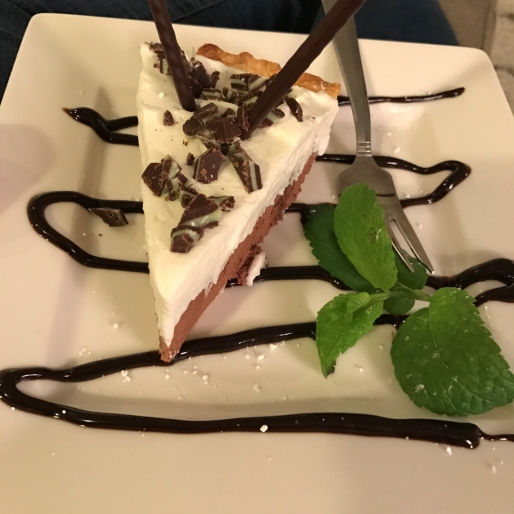 Sunday was Christmas Eve.  I decided to take it easy.  Since jumping back into working out, I’ve been extremely active and on my feet a lot.  My lack of yoga and strength training has been affecting me and I can tell I’m super tight and my supporting muscles and ligaments were getting a little mad at me.  We watched Christmas movies all day until it was time for Christmas Eve service with my mom and stepdad.  Afterward, we opened presents with them. 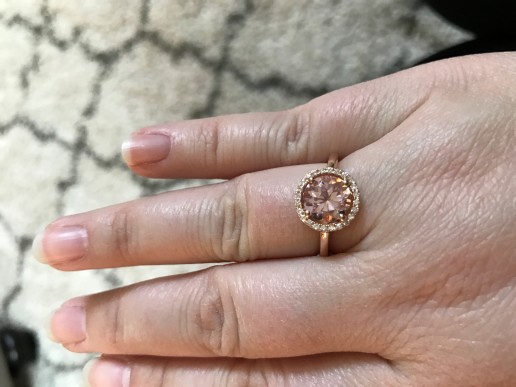 My husband and I got up and opened presents together Christmas morning.  We both spoiled each other way too much.  Afterward, we headed to my in-laws house for a late lunch/early dinner with my brother in law and my husband’s aunt.  We had a great time!

How was your Christmas?  Do you have any great traditions with your family?

I’m baaaaaack!!!! Well, I’ve said that before and then disappeared again.  I’m going to try to be back for real this time.

I took a lot of time off of any exercising due to the neuroma that wouldn’t heal! I developed a neuroma in my foot in May.  After many visits to the podiatrist, lots of steroids, and completely ceasing all exercise, its finally resolved itself.  I had a very hard time getting the swelling to go down, but now I’m finally back at it.

I’ve done a few races this fall – mostly walking, but introducing a little running slowly back into the mix.  I’ll probably catch up on some blog posts about those races soon.

More to come from me – and I cannot wait to catch up with all of you!

Did you guys think I disappeared forever? I know, felt like that to me too.

A lot of big things have happened since I last checked in with you guys:

First off! We closed a chapter of our lives in the old house and have moved into the home we built! Here are a few pictures 🙂 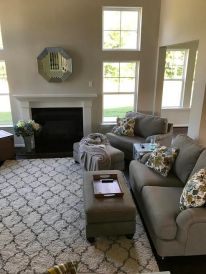 I had my first DNS for a race when I injured my foot.  I had signed up for the race for Memorial Day weekend in late April.  The week before Memorial Day I started having pain in my forefoot on the top of my foot.  An X-ray reveal no fracture, but it hurt too bad and I decided to not do the race.  Still picked up my t-shirt though 🙂

I have a doctor’s appointment next week to get another look at it.  My foot had started feeling better, but in the last week it started hurting again.  I have a lot of swelling on the top of my foot again.  I’ll let you all know how it turns out!

This is a lot of why you haven’t heard from me.  I haven’t been able to do much of anything in terms of working out.  No yoga, running, walking, anything.  Once I figure out what is going on, I want to come up with a game plan of what I can safely do.

I have an employee!  Well, she’s a summer intern, but she’s fabulous and I want to keep her forever.  She is going into her senior year at Randolph Macon and she’s such a sweet girl.

So what’s coming up?  We have a trip to Seattle coming up and a trip to San Diego.What are the must do places to see and eat?

The beginning of the week was pretty uneventful.  I got in a treadmill workout on Thursday of 2 miles, but otherwise, we spend the week doing chores and getting stuff done after work.  We have about 5 weeks left until we move, so there is a lot to be done.

My company is nice enough to let us have the day off on our birthday, so I spent mine shopping, getting free Starbucks, watching Netflix, etc.  I got in a good workout at yoga in the morning – not a bad way to start out my 30s!

When Michael got home, we went out to dinner and celebrated.

Saturday was my big party day.  My mom and husband planned a party for me at her house.  We had tacos – my favorite – and cake pops for dessert.  It was really good to see everyone – I have some friends that I don’t get to see as often as I like.  It was a great time with family and friends – they are the most important things in our lives!

On Sunday, we went to pick out furniture and area rugs for our new house.  It was a busy day, but we got a lot done.

How was your weekend? What do you enjoy doing for your birthday?

There wasn’t much going on last week – hence the lack of an update.  This is a really short one at that…  Michael got sick with the flu, then pneumonia, and I spent most of my week taking care of him and the house.

On a more positive note, we got an offer on our townhouse that we are selling and we have a ratified contract! We are excited and will close on our current home 5 days after we close on the new house!

This wasn’t a great workout week, but it was a really nice week otherwise.  I had some great quality time with Michael and got out of the house and had a blast.

Decided that since it was warmer weather out, we’d get in 2 miles outside.  We walked around my mom’s neighborhood (its a mile around).

Got in 2 miles on the treadmill.

I was exhausted from a long day on Wednesday and wasn’t feeling well, so I decided to skip yoga.

We had our date night on Thursday and watched a movie on Netflix.

We had a showing on Friday night, so we got out of the house and went to Mexican.

On Saturday, we had to be out of the house for a few showings, so we decided to drive up to Richmond and get our rings cleaned and get some lunch.  We found a cool place called Supper! and had some great salads.

We came home in the early afternoon, and then went out to Mermaid Winery with some friends and had a great night.

After church on Sunday, we grabbed some lunch and did our grocery shopping.  We stopped by the house to measure for a fridge and got to see the progress.  We then went to Home Depot and bought said fridge! 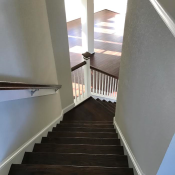 We also had to file a police report because someone decided to shoot a BB gun through my taillight.

How was your week? Do you like going to wineries?

coolrunningsjourney
Create a free website or blog at WordPress.com.