This Christmas race is always a favorite of mine, but this year was extra special.  We were trying to break a world record for a Santa run.  It required us to wear a very specific Santa suit – jacket, pants, beard, hat and belt.

Spoiler alert: We got the world record!!!!!I am a Guinness Book of World Record holder 🙂

Since the race started at 4:30pm, I opted to do race day pickup.  I arrived around 2pm and I picked up my packet.  I wanted a lot of time to get ready because I knew I had to sort out the special Santa suit. They had special alteration stations set up.

The temperature race day was a little warmer than I hoped. It was in the high 50s, and because I knew I had to wear real clothes under the santa suit, I knew I’d be a little warm.  I may or may not have sweated through my hat…

I just hung out and watched all the people in their Santa costumes.  It was pretty comical to see thousands of Santas all together in one area.

I got dressed about a half hour before the race, and then headed to my corral.

I love this race.  I started off running, but planned on walking most of the race.  Miles 1 and 2 were fairly uneventful.  I loved getting to see all the lights on the boardwalk and even stopped and snapped a few pictures. 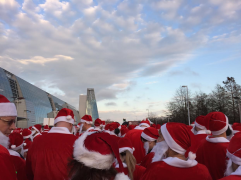 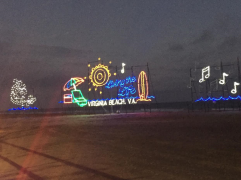 After the halfway mark, I started walking/running some.  I was kind of ready to be done after we finished running through the lights, because the rest of the race is just through the city streets in the dark, which is only but so interesting.

I was able to get my medal and my Triple Jog Dare medal – which is awesome!!!!

They gave out gloves as a finisher item, which is pretty awesome, because I lost my pair from a few years ago at this year’s Shamrock.  I had part of a beer and some of the sausage and potato soup, but I was ready to head home and get the Santa suit off!

I wore my Santa outfit to Chick Fila to pick up dinner and gave the girl at the drive through a little giggle.

Do you do any Christmas races? Have you ever tried to break a work record?