I worked a little late on Monday and had some errands to run after work.  I also had to deal with my credit card information being stolen and cancelling my card and dealing with the fraudulent transactions.  I’m getting increasingly frustrated with criminals who steal people information and turn their worlds upside down. My husband’s card was just compromised a few weeks ago!

On Tuesday, the painter came back to finish painting our ceilings. After he finished up, I spent the rest of the night putting all our stuff back in the rooms.

On Wednesday, I came home and reorganized my entire closet. I didn’t get rid of nearly as many clothes as I should have, but it was a start!

Happy Thanksgiving!  We got to sleep in a bit, enjoy a very slow morning of coffee drinking, then headed down to Michael’s parents for the holiday.  The food was delicious, but the company was the best part! I have zero pictures of the day…that’s how much fun we were having.

I know a lot of people have off the day after Thanksgiving, I’m not one of them.  I’ve taken this day off the past few years, but I’m hoarding all my vacation for the week between Christmas and New Year’s! Its a pretty quiet day at work and I got a lot done.

After work, I went to Old Navy and hit up the 50% off sale.  I got some wonderful new clothes.  Guess I need to get rid of more in my closet…

On Saturday morning, I got up, got some laundry started, then got to Christmas decorating. In order to get the tree to fit in the living room, I have to move all the furniture.  So I cleaned as I went. 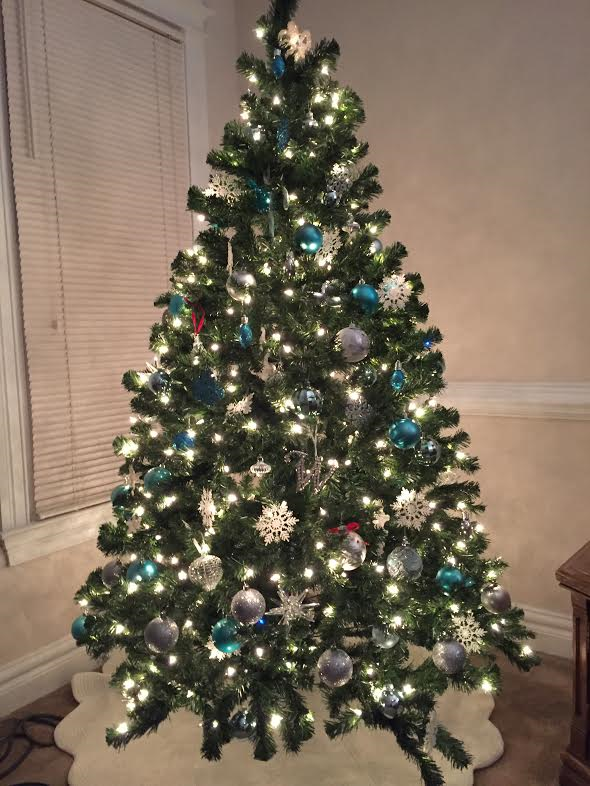 On Saturday afternoon, Michael and his brother and I went to a craft show in VA Beach.  We got some cool presents for our family.

On Sunday, we had church responsibilities, then went out to lunch with my mom, stepdad and grandmother (in town from PA).  It was really nice to see her.  We did some more chores around the house.  Still didn’t get the darn raking done…

This is only the 3rd year they’ve held the Norfolk Harbor race series in downtown Norfolk (formerly called Harbor Lights).  I did the half marathon 2 years ago, and the 5k last year. 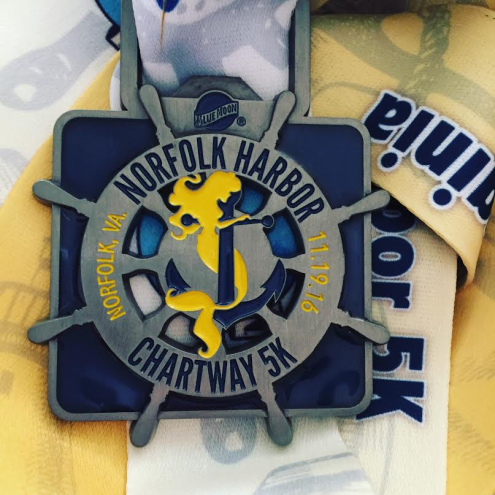 I opted for race-day pickup.  It was quick and efficient.  The shirts fit much better than the Wicked shirts from a few weeks ago!

It was about 40 degrees at the start.  It was going to warm up to 70 during the day, but I knew that the wind would make me want long sleeves.

I opted for capris, a tank top, long sleeved shirt over, and my go-to hat.

Since I did race day pickup, I just stayed at the building until about 20 minutes before the start when I headed outside.  There was a lot of great people watching.

I was in corral 3 of 5, and I positioned myself toward the back, because I knew I planned to mostly walk with a little bit of running mixed in.  We got off fairly quickly.  The first half was pretty uneventful, a little walking and running all mixed together.  I saw a runner fall on one of the areas with cobblestones.  She did a somersault! There was a volunteer right there that scooped her up and helped her out.  She seemed ok, probably just a little embarrassed.

Michael went to a Starbucks to sit while I ran.  I actually saw him sitting in there and I waved at him as a ran by! 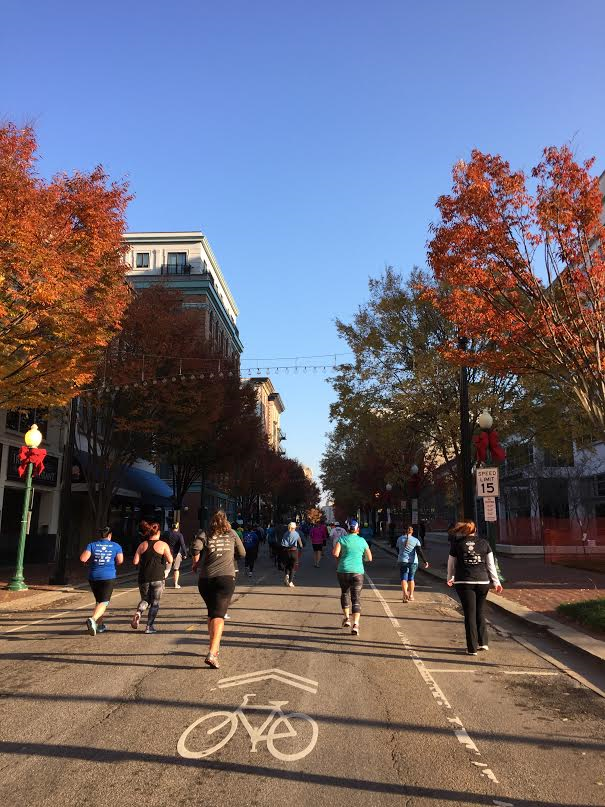 The second half seemed to go pretty slow.  I thought I knew where we were in the city, but with all the turns, I was a bit turned around.  I saw where we were at mile 2 and couldn’t believe we had a whole mile to go.

It was a beautiful day for an after party.  I got my beer and snacks and walked around a bit with Michael. We had some plans for the day, so we didn’t stay long, but it was a nice time.

Great weather for this race! I really enjoyed it! This is one of my favorites, and its part two of the Triple Jog challenge (Wicked was the first, and Surf N Santa is the last).

Have you every run a race that had cobblestones on the course? Do you think the course I ran was short, or is it possible that I just ran the tangents REALLY well? 🙂

I have been a terrible blogger lately.  We’ve had a lot of “life” going on lately, and I don’t have a lot of energy  or motivation to blog.  Plus, I’ve not really been doing any working out recently, so that’s frustrating, and making me not want to blog.

On Monday and Tuesday, I had meetings with a potential vendor at work.  They were presenting some comprehensive solutions for us, and we went through two very long days of demos!

Nothing terribly exciting happened on Wednesday and Thursday. Blah.

We have a foundation!  It was a huge surprise that they’ve started on the foundation of our new house.  We knew they’d be starting the foundation work before the end of the year, but didn’t expect to se it so soon! 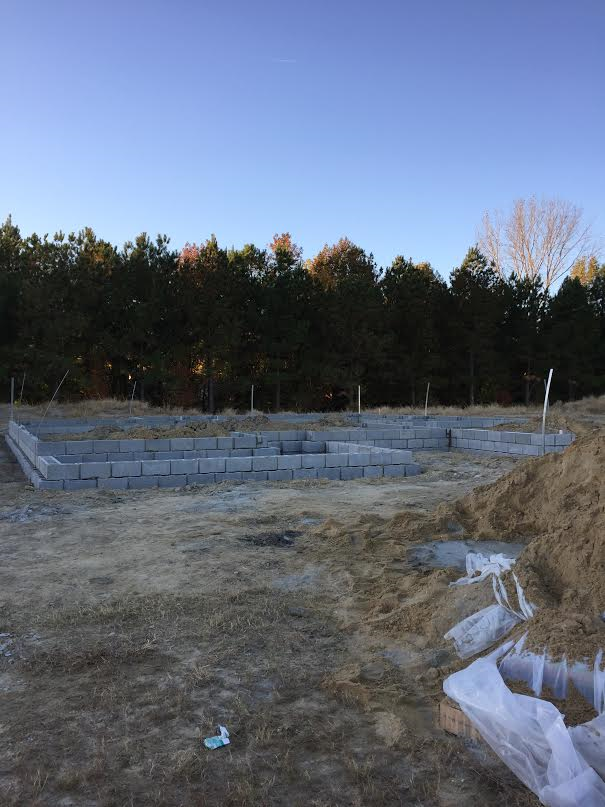 I’ll probably do a house update soon when we get a little more movement on it.

Saturday was the Norfolk Harbor 5k. This was previously called the Harbor Lights 5k.  More to come in a recap later this week!

After the race, I came home and did a little yard work before I jumped in the shower.  Hey…if I’m already sweaty…  We had a painter come to paint a few ceilings in our house that were damaged from the roof leak we had.  (Did I even tell you guys about that?! We had to get a new roof).

We took some stuff to the storage unit, did some cleaning out, laundry, etc.  It was a pretty darn productive day.  It was a BEAUTIFUL day on Saturday – around 75 degrees.  In the afternoon a cold front started moving in, so we went to Red Robin for dinner, which was a nice treat to get out and have some nice warm soup!

It was a very cold morning on Sunday!

After church responsibilities on Sunday morning, we came home and took a nap.  I think Saturday wiped us out. We did our chores, then we watched the Eagles game, which turned out to be a disappointment.   Then we watched 60 Minutes like an old couple 🙂

How was your week? How has the weather been?

Sorry for the late posting!  The Wicked 10k is always a great time! Who doesn’t love a Halloween race?! I love J&A races and I love running out at the VA Beach Oceanfront. Its a familiar place to run for me.

I opted for race day pickup because I’m lazy.  Pickup was pretty efficient, but the shirts were a disappointment.  I ordered the same size I normally do, and it was way too small.  Guess I won’t be wearing it!

The race started at about 40 degrees, warming up to 50 degrees within a few hours.  I opted for a short sleeved shirt under a long sleeved shirt, and capris.  I wore a hat, because I’m in love with wearing them for races now.  No costume this year because I was lazy!

I hung out in the convention center post packet pickup and just relaxed.  I headed out about 20 minutes before the race start so I could get in my corral and look at all the costumes!

I had planned on walking this race because I haven’t really been doing really ANY working out, let alone training for a race.

The first half of the race went pretty quickly, and I was able to stick to about 14 minute miles walking, which I was pretty proud of.  I really enjoyed getting to see all of the costumes on parts of the course that wrapped back around itself.

The last half of the race was a little rough. I was ready to be done.  I am not really a fan of the 10k distance at all.  I started getting a blister on my heel (sock seam in a bad place) and I slowed down considerably.

To be honest, I didn’t even attend the after party. Michael and I had plans later in the day and we wanted to get out of there.  After it being so difficult to get beer afterward last year, I didn’t really mind skipping it!

Great weather and a great day.  I wish I had trained for it and run it, but I still had a ton of fun walking!

Did anyone run a Halloween run? How was it? Have you ever dressed up for a race? 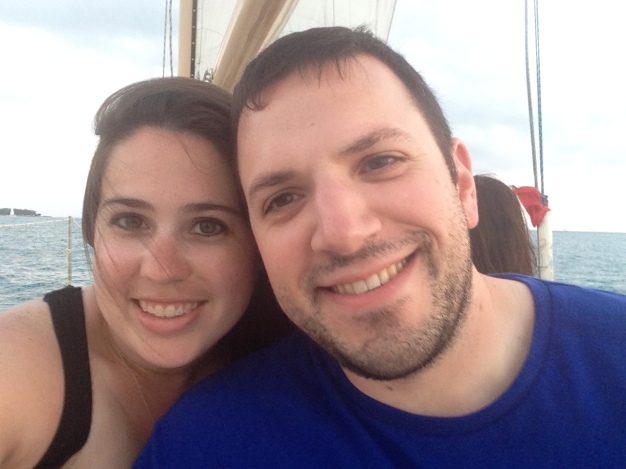